Reporter Noah Glick looks at what is being done to attract more people to Nevada’s rural communities. 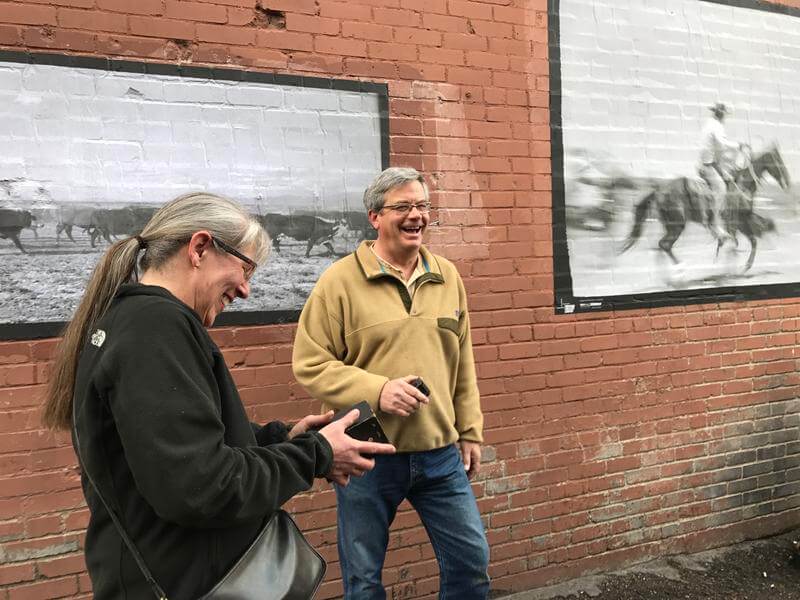 Trish and Deon Reynolds show off some of their large photographs during the WestStops exhibit tour, as part of the National Cowboy Poetry Gathering in Elko in February. Credit: NOAH GLICK

Tourism is Nevada’s largest industry, making up nearly 30 percent of total state employment and bringing in more than $3 billion in tax revenue. But most visitors are only stopping in Nevada’s two urban centers: Las Vegas and Reno.

[Republished – read or listen to the original story at KUNR.org]

During a sunny, winter morning in downtown Elko, photographers Deon and Trish Reynolds lead about a dozen people through crunchy, snow-covered sidewalks and alleys. 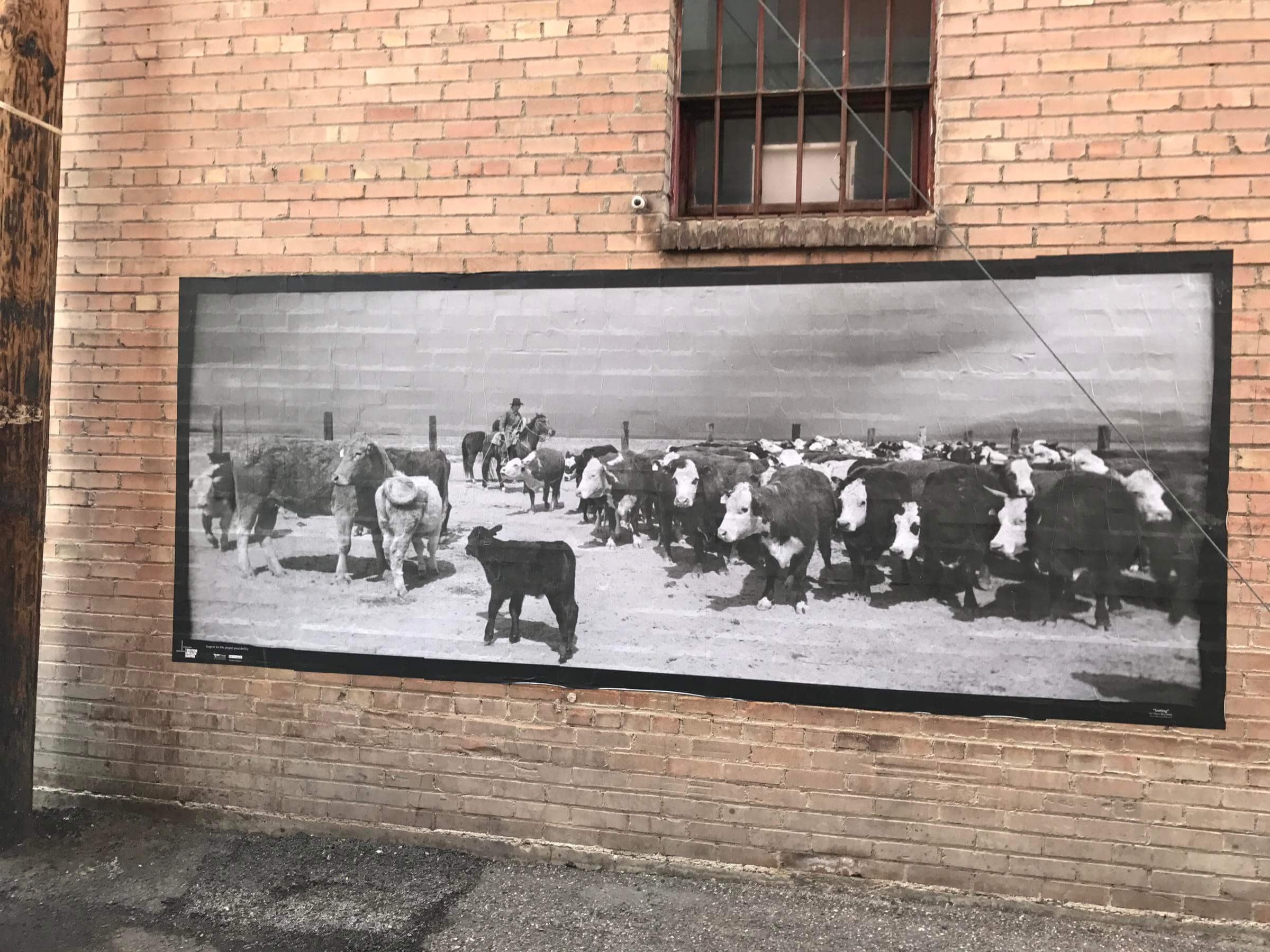 Trish Reynolds’ image was taken with a 1920’s Kodak box camera. Her and husband Deon Reynolds both use unorthodox cameras for their project. CREDIT NOAH GLICK[/caption] They?re showing off large-scale photos of rural Nevada they’ve taken over the past 30 years, images that are adhered to brick walls using wheat paste. This was photographed in Green Springs ranch, which is about a 45-minute drive from our house in Eureka,” Trish Reynolds says. “I made the image with a 1920?s Kodak box camera. “Do you give lessons on those?? a tour participant asks. The exhibit, called WestStops, showcases Nevada’s history through black-and-white photography. But Deon Reynolds says it also helps shape Elko’s identity. It really has a lot to do with place making and art place making,” Reynolds says. “And I think that these types of activities, I’m seeing local businesses already getting quite excited about this. So we’re hoping to grow this and make this a place for people to want to come and hang out. Claudia Vecchio is the director of Nevada’s Department of Tourism and Cultural Affairs. She says the state has historically been known as a gambling destination, but that’s changing. We do know that about 45 percent of people who visited Nevada in 2015 report having a cultural experience in the state,” she says. “So there are a lot of people who think that Nevada isn’t necessarily a cultural destination, but know that our visitors are looking to Nevada for those cultural experiences. Those experiences range from food festivals and ethnic celebrations to history tours and political gatherings. The state’s most prolific rural event, Burning Man, brought in more than 70,000 visitors to the Black Rock Desert last year. 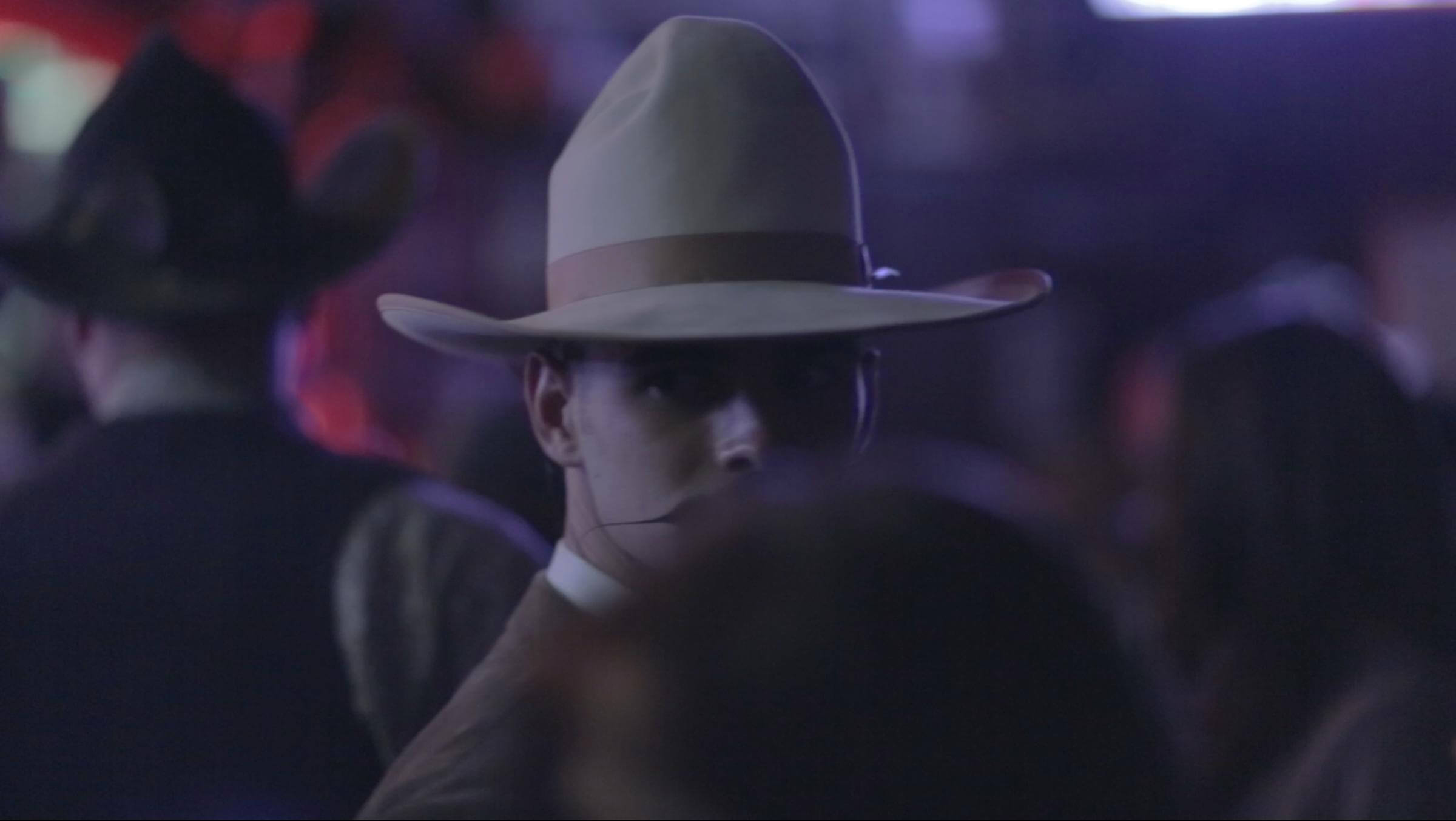 A man takes part in an event at the National Cowboy Poetry Gathering in Elko. CREDIT HANNAH LOGAN PETERSON[/caption] And in Elko, approximately 5,000 people attended this month’s National Cowboy Poetry Gathering, about a quarter of the city’s population. Elko Mayor Chris Johnson says his city is working to position itself as a cultural hub between Reno and Salt Lake City. ?So if you?ve got that openness, and you?ve got the cowboy attitude, then that?s a great image to have, and I think that?s what people view Elko most as, he says. Johnson says it can also attract visitors from more densely-populated areas. I could really see where folks in Europe or in bigger cities would say, I want to go learn more about that. I don’t have that,?” he says. “Because when you get to northern Nevada, most every day you can see over 100 miles away.? Nevada Lieutenant Governor Mark Hutchison chairs the state?s commission on tourism. He says rural Nevada offers more than many visitors realize. ?Believe it or not, we’ve got some great wineries in the state of Nevada; there’s a whole winery industry that they come see,” Hutchison says. “Of course, you know there are outdoor love for Nevada and scenic Nevada. So we’ve got a real cultural diversification, we’ve got a lot of art. The commission’s goal is to encourage people to venture outside of the casinos. So folks may come to Reno or they may come to Las Vegas, but then they extend their stay into rural Nevada, he says. But the effort is slow-going. In 2015, rural visitors spent $2.3 billion. And while that sounds like a lot, it’s the lowest since 2011. Rural tourism accounts for ten percent of total visitors, but only four percent of the state’s travel industry and less than one percent of the state’s total GDP. In response, tourism officials like Claudia Vecchio are increasing their outreach to younger people, using a Don’t Fence Me In marketing campaign that tells visitors to go home with more stories than souvenirs. Travel Nevada’s latest television commercial urges young people to get out into rural areas, to “bring home more stories than souvenirs.” As we talk more to millennials and adventure-minded people who are willing to go that extra mile, or go beyond what they know already, then Nevada really comes to life,? she says. Vecchio says that could mean walking old neighborhoods in Las Vegas or Reno. Or, better yet, exploring one of Nevada’s many ghost towns or traditional ranches. View more photos of the WestStops exhibit below: 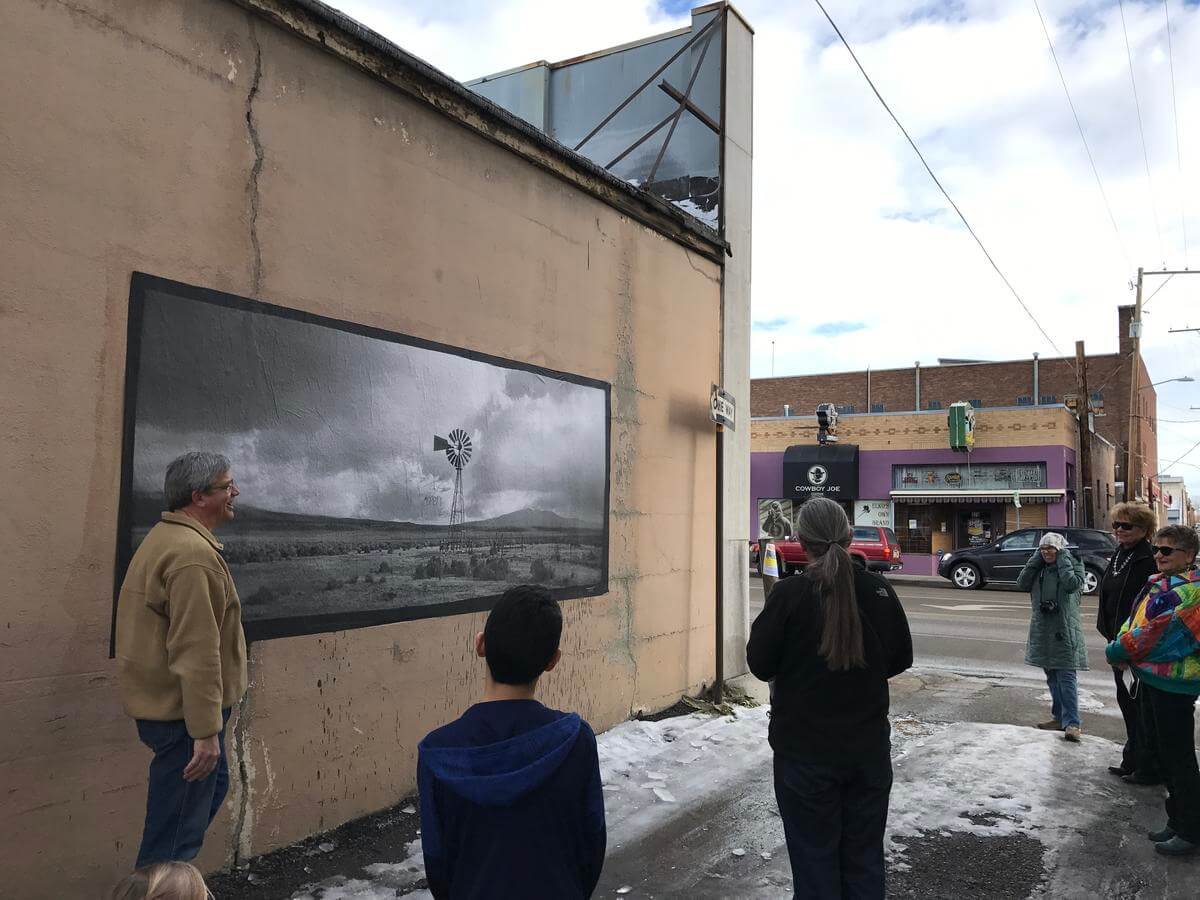