Google Trekker Has Come to Nevada 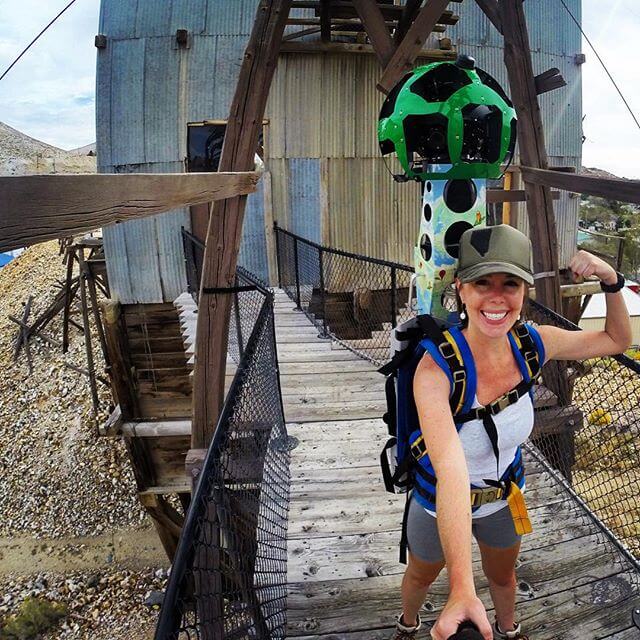 From flying high in a hot air balloon to trekking across ghost towns, you have quite a bit to cover. How did you pick the locations and which one are you excited for the most?
You’re right, I’ve got quite the ambitious, 3-week schedule in front of me! When originally partnering with Google, Travel Nevada was made aware of a rigid timeline to complete the project. We were to pitch certain locations—which Google would then approve or deny—allow us to borrow the equipment, shoot the locations and return it back to them all within about a month’s time. Of the 27 proposed locations, 24 of them were approved—the only that were eliminated were those that had already been Trekked!

As Travel Nevada’s lead adventurer, I am certainly keyed into the innumerable and absolutely spectacular locations Nevada uniquely offers to its visitors, which made for an extremely tough decision making process. As the Trekker is designed to highlight places that vehicles cannot reach, it was important for me to educate the public not only about Nevada’s unimaginable beauty, but also things that define our state. I couldn’t plan a trek without hitting some no-brainer recreational places like Lamoille Canyon and Valley of Fire State Park, but it was also equally vital for me to include locations that boast Nevada’s exceptional mining history, like Berlin-Ichthyosaur State Park, the Tonopah Historic Mining Park or the Nevada Northern Railway. On that same note, it didn’t feel right to leave out the tremendous American Indian influence Nevada has, and it was essential that I hit places like Lovelock Cave and Hickison Petroglyphs. Furthermore, I couldn’t imagine doing a trek without showing off stunning places that travelers would never imagine to be in the Silver State, like the vineyards at Churchill Vineyards or Spencer Hot Spring.

To complicate our shot locations, the trekker cannot be worn anywhere indoors or be taken on any public roads [the Google Street Car already captures that,] but instead focuses on capturing locations that can’t be reached via vehicle or are privately owned to some extent. When all is said and done, we will have 24 locations—composed of State Parks, U.S. Forest Service, BLM, Museums, National Wildlife Refuge, and even one event—that will be used on GoogleMaps.com and also on TravelNevada.com. It’s tough to pick a favorite, but Cowboy Country lies near and dear to my heart—I’m always excited for a trip to Lamoille!

The Google Trekker is a beast. What are the specs?
Unlike the Google Street View car that’s used for GoogleMaps.com, this thing is built to be worn as a backpack. All in all, the Google Trekker pack weighs 42 pounds when it’s locked and loaded with memory, batteries and bluetooth. I’m 5’5, but when wearing the Trekker am nearly 7 feet tall! The reason it’s so giant is because the top of the pack is made of a spherical dome that’s equipped with a whopping 15 cameras. When the Trekker is running, each camera takes a picture every 2 seconds. These still photos are then stitched together to create a seamless, 360-degree photo experience for users to navigate through on GoogleMaps.com and TravelNevada.com.

Why did Travel Nevada choose to trek across Nevada and why is this important?
To get to partner with an internationally renowned company like Google is amazing! By Trekking across the state, Travel Nevada will get to help make history in capturing with never-before-documented photography for mapping. Plus, in doing so, we get to show how worthy Nevada is of your next vacation!

I know a few other DMOs have used the Trekker. Is there anything setting us apart from them on using the Trekker?
As far as I know, only a handful of other states have completed the Google Trekker for tourism-related purposes. Perhaps what makes this especially unique for Travel Nevada and our partnership with Google is the type of locations that we will highlight with the Trekker. Sure other states have highlighted state parks and other recreational activities [which Travel Nevada will also certainly do,] but what separates Nevada are its historic and cultural sites that we will promote with the Trekker.

Also, Travel Nevada is planning on implementing the actual mapping into TravelNevada.com in order to educate, inspire and help future travelers plan a trip to Nevada. This 360-degree, virtual-reality experience that will permanently live on TravelNevada.com will give potential visitors an immersive view of Nevada’s landscape and culture.

You really travelled all over Nevada. What were your total miles trekked?
Statewide travel efforts regarding travel totaled in what I estimate to be 2,587 miles! Actual Trekking legwork, pack-on-back I would estimate around 77 miles total (if you’re considering standing the back of pickup trucks, riding on ATVs, touring in hot air balloons and cruising around in boats.) Considering the amount of people who helped carry the trekker, I couldn’t think of more of a true testament to Nevada and the spirit of its people. I joked around about having folks meet me at mile marker 81 at 1:30 p.m. on a Tuesday and sure enough, they all followed through to help out. This project truly would not have been possible without this band of brothers mentality… my Trekker Mafia as I jokingly referred to them! For certain, the toughest legs were Lamoille Canyon, as it required the most intense hiking by traditional standards, Valley of Fire, considering it was 103 degrees outside, and Sand Mountain where I had to hold onto the back of a quad driver with all my strength for about an hour’s riding time!